Barrocal: fitting the puzzle pieces together 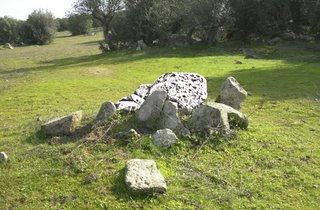 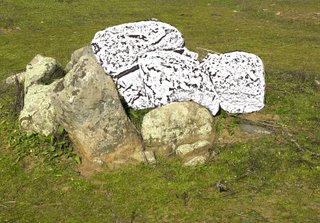 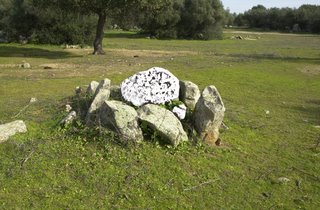 Field walking in Barrocal is bringing novelties, details for a better understanding of the history of this major megalithic landscape.
Apart from some new roman and medieval sites, as well as some new neolithic artifact scatters,
this week I found a new monument: it is a protomegalithic tomb, some 200 m south from the menhir, close to que outcrops named as Barroca 1.
The monument, seemingly a classic horse shoe shaped chamber, without passage, is partially hidden under some allogenous stones (whitish in the images), but keeps six uprights visible and a possible entrance facing eastwards.

This kind of structures, tough very common on the North-West of Central Alentejo (50% of the total), are only vestigial in the South-East of the region, including Reguengos de Monsaraz. Some elements, however, suggest that, at least in Barrocal, they were quite well represented.
Actually, some of the "antas" recorded by the Leisner, in the Barrocal area, should eventually be classified as protomegalithic tombs and not as passage graves (antas).

The chronological sequence of protomegalithic tombs - passage graves, though still in discussion is supported, in Iberia, by the great monument of Dombate, near A Coruña, excavated and published, in the recent years.
Labels: Antas Barrocal